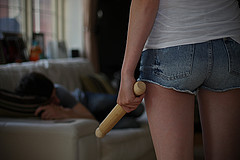 Domestic Violence Prevention Act
The California family code of conduct set forth various rules and standards of family behavior with a domestic violence prevention act. Certain behavioral norms were defined and made a part of the general laws for domestic relationships. These family laws defines what abuse is, set standards for people who live together, defined domestic violence, and described certain legal remedies available. Defining what abuse is began an understanding of certain behaviors that are not tolerated by a modern and civilized society.

Abuse and What This Means
Defining what abuse is allowed the California courts to specify what behaviors are excessive and beyond a defined limit of tolerance. Abuse within a domestic or close interpersonal relationship can mean any of the following types of excessive behaviors:

1. Abuse may mean that the abusing person intentionally or recklessly caused or attempted to cause bodily injury to the other partner. Intention means that the abuser thought this out and decided to go ahead with the directed violence. Reckless may mean that the abuser exhibited the behavior without thinking through any consequences of the behavior. The acts of violence can be spontaneous or emotionally provoked. There are additional domestic violence rules for provoked behaviors or violent behaviors exhibited while under the influence of particular intoxicants.

2. Sexual assaults are classified as forms of abuse. Unwanted sexual contact is defined as an act of violence and may be classified as an additional charge as well. This type of assault between two persons is usually forbidden in most modern and civilized societies. The abuser has stepped over a red line that is usually responded to with a type of individual punishment.

3. Abuse may mean that the victim is placed in reasonable apprehension of an imminent danger. The victim senses that bodily injury may occur to themselves or to another person. This type of abuse is creating an atmosphere of danger and is a type of harassment. Violent behaviors may begin with this type of underlying apprehension.

4. Other types of abusive behaviors may occur and are a part of the parameters of the California family code. Financial abuse may be included in this form of domestic violence. The victim is taken advantage of financially, or money is forced from the inhabitant for other reasons.

Defining Relationships
The domestic violence prevention act of the California family code defines certain types of family relationships. An affinity or family connection may be created by marrying another person. The related family members may be a connected part of this union as well. Persons who live together are creating a domestic relationship. The two persons are regularly living together or have regularly lived together in the past. Past domestic partners or past spouses are included in this definition of domestic relationships. These family code laws apply to any of these connections.

Domestic Violence in a Relationship
Domestic violence is the area of social behavior that is included in the California family code laws. Domestic violence may include any of the following behaviors:

1. A spouse or former spouse is under the jurisdiction of the family code laws created by the California court system.

3. Domestic violence laws involve two individuals who have had a child together. The individuals can be married or not married. The male in the relationship is noted as the father of the child, and the female in the relationship is noted as the mother. Certain parenting laws come under the jurisdiction of the domestic violence prevention act, and the uniform parenting act laws apply as well.

4. Other individuals may be a part of the jurisdiction that covers domestic violence and parenting laws. Others involved may be related by birth or marriage. Related to each other may mean that the relationships are distant or by marriage.

Preventive Measures for Domestic Violence
Certain preventive measures have been in place that may be used under certain circumstances. Emergency protective orders may be used for imminently threatening domestic violence behaviors by a partner or spouse or other connected individual. An emergency protective order is a type of restraining order that may be issued in one of the following ways:

2. A protective order or restraining order can be issued after the offending individual is sent a notice, and a hearing is set in order to address the alleged behaviors. This type of restraining order is used for describing and stopping specific acts of abuse.

3. A protective order can be issued with a judgment against the individual who has offended the other party. The offending party is served the judgment, and the judgment document specifies what the restrictions are.

Restraining Orders
Restraining orders are a certain remedy for offending behaviors that are classified as domestic violence. The person who lives in the residence with the plaintiff may be asked to leave the dwelling. An order can be given that allows the second resident to be evicted from the house. Other behaviors can be described in the protective order that define which behaviors are offensive and what the offending party can do to remedy these violations.

Summary
The domestic violence prevention act is a part of the California family code. The domestic violence rules specify certain domestic behaviors that are offensive and should be avoided. Intentional and reckless behaviors are defined in a domestic setting. Domestic partners and family members are outlined. This family code allows certain remedies for domestic violence. Notices may be sent out to the offending party, a hearing may be required for the offender to explain certain behaviors, or a judgment may be issued that sets up certain behavioral limits for the offender. Projects are underway that address these laws in certain court settings. Court actions are available in civil, juvenile, and criminal courts.